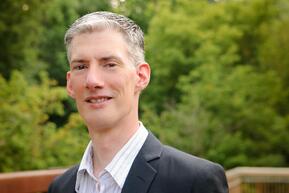 Brad Croushorn aims to infuse elements of uplifting energy into his music, crafting songs with a message to touch hearts and minds. Brad holds an MM in sacred music from Westminster Choir College and a BA in music performance and education from Eastern Mennonite University. He is a member of the North Carolina Songwriters Co-op, Carolina Contemporary Composers, Sacred Music Composers Association, and ASCAP. His outlook is ecumenical and inclusive—this fundamentally influences his songwriting and choral composing.

When not performing or writing, he immerses himself in the possibilities of song everywhere. Taking time to be still, make these discoveries, and be a part of life’s music, is a gift deeply treasured!

Visit www.BradCroushorn.net to stay in touch or explore more of his music. 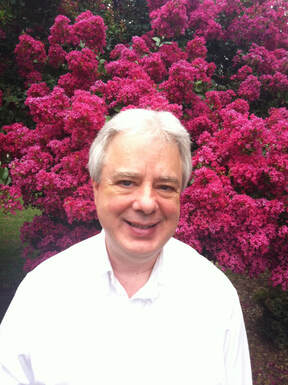 David Durkop is a composer, organist, and conductor residing in Durham, NC. He received the degree of Bachelor of Music in Organ Performance from the Oberlin Conservatory of Music, and the Master of Fine Arts in Conducting from Carnegie Mellon University. He has also done coursework in Musicology at the University of Pittsburgh.

As a church musician, Durkop has held positions at historic St. James Episcopal Church in Wilmington, NC, and the First Presbyterian Church of Pittsburgh, PA. He has conducted works including Poulenc’s Gloria, Haydn’s Creation, Mendelssohn’s Elijah, and Handel’s Messiah. During the late 1990s, the Messiah concerts with orchestra were Pittsburgh’s downtown performance of this classic work.

His organ works have been used in weddings and worship services at Duke University Chapel by David Arcus, formerly Associate University Organist at Duke. In 2009, Arcus opened his recital with Durkop’s Toccata in g minor. Diane Bish performed Durkop’s wedding music and hymn arrangements on her television program, The Joy of Music. In 2003 and 2009, the Duke Chapel Choir sang his anthem, “O Sing Unto the Lord a New Song.” St. Joseph’s Episcopal Church in Durham, NC, commissioned his anthem, “Your Love, O Lord, Forever I Will Sing” in 2013 for their patronal feast day (St. Joseph).

Durkop’s guiding principle is the scripture passage, “I can do all things through Christ, who strengthens me” (Philippians 4:13). 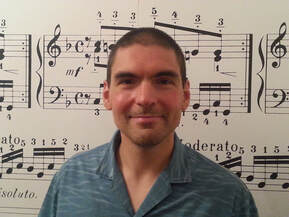 Born 1975 in Hartford, Connecticut, Jacob Groff received his Bachelor of Music degree in music composition from the University of Oregon and his Master's degree in music composition from Westminster Choir College in Princeton, NJ.  He has studied with composers Robert Kyr, Jack Boss, and Joel Phillips.  Mr. Groff is sought after for his choral, vocal and chamber music. His works have been performed across the country, in both private and public venues. He won the 2008 composers competition from The Children's Aid Society Chorus in New York City.  In 2007  the professional choir Voce based in Hartford, CT performed two of his choral works.  He has also had choral works premiered by the Cary Concert Singers of Cary NC.  Other works for flutist Lisa Plasse and soprano Annette Stowe can be heard on his recording "evolve".  Mr. Groff currently resides in Fuquay Varina, NC where he maintains a private teaching studio.  www.jacobgroffmusic.com 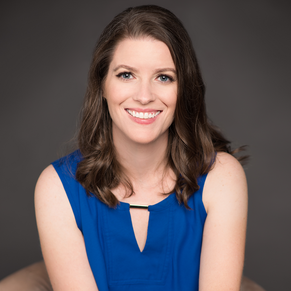 Chrissy Ricker is a pianist, teacher, and composer from Fuquay-Varina, NC. She received her Bachelor of Music and Master of Music degrees in piano performance and pedagogy from Meredith College in Raleigh. Chrissy is a Nationally Certified Teacher of Music (NCTM) and maintains an active piano studio where she focuses on sharing her love of all types of music with her students.

Chrissy enjoys composing music in a variety of styles, from classical to rock. Chrissy's main compositional focus is in writing contemporary pedagogical works for students of all ages. Her original music is published by Neil A. Kjos Music Company, Piano Pronto Publishing, and SMP Press. A prolific arranger, Chrissy has also arranged hundreds of popular titles for pianists at all levels. She is a Signature Artist for Musicnotes, the world's leading digital sheet music retailer. 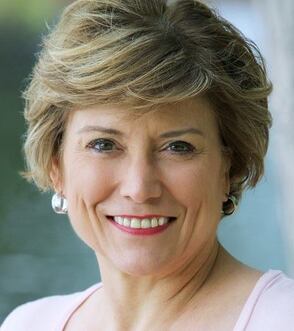 Kitty Scott has been an active teacher, composer, and performer since graduating from Northwestern University with a Piano Performance degree.  In addition to solo recitals and performing concerti with orchestras, Kitty was pianist for La Belle Voce Opera Ensemble and the Ridgewood Gilbert and Sullivan Society in New Jersey.  As a masterclass pianist Kitty also worked closely with Robert Marcellus and Walfrid Kuala accompanying their masterclasses.  Kitty now performs and composes for Carolina Contemporary Composers and teaches over thirty students per week! 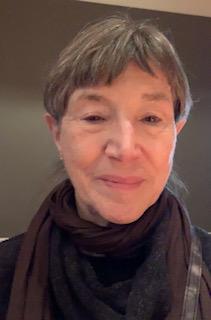 Gabrael StClair is a chorister at St. Philip's Episcopal Church in Durham, NC under the musical direction of Lewis Moore, and a member of the St. Joseph’s Vespers Group under the direction of Jack Mitchell.  From 2006 until 2017, she was a cantor at Immaculate Conception Catholic Church, Durham, NC.  She loves the mystical poetry of St. John of the Cross, the chants of Hildegard of Bingen, and old English folk songs.  She started composing in 2008 when studying with Lorna Collingridge.  Miss StClair has written over 30 songs for church worship, most of which are simple 2- or 3-part tunes suitable for Communion Meditation.  Her songs have been featured at Mass at the St. Thomas More Chapel, Yale University. Miss StClair is currently following her interest in composing for woodwinds. 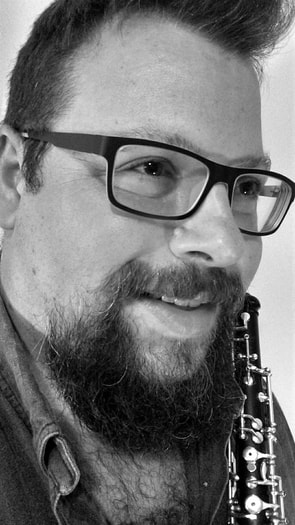 Dr. Thomas Turanchik teaches oboe, clarinet, and bassoon at Elon University, and is Oboe and Bassoon
Instructor at Moore Music Company in Greensboro.  He has received a DMA in Oboe Performance, a MM in Woodwind Performance and a BA in Music from the University of North Carolina at Greensboro, and a BA in French from Elon University.  He has over 20 years of teaching experience with students aged 10 to 70 and has had private students pursue music at institutions such as Appalachian State University, Meredith College, and the University of North Carolina Greensboro.  In addition to holding numerous woodwind masterclasses at area middle and high schools, he also sells a line of handmade oboe, English horn, and bassoon reeds to students and performers throughout central NC and teaches reed-making to advancing double reed students.

An active arranger and composer, he has had several works premiered by the Elon University Orchestra, the UNCG Oboe and Clarinet Ensembles, the Elon Percussion Ensemble, and a graduate UNCG saxophone quartet.  He was commissioned for a work for double reed ensemble for the closing performance at the UNCG Bocal Majority Double Reed Day in January of 2020.   His compositional style is eclectic and often includes elements of Baroque, Classical and Pop.  While most of his works are for diverse chamber ensembles featuring woodwinds, his compositions range from solo piano to full orchestra and even handbell choirs.

Working as principal and solo oboist in the Elon University and the Lee County Community Orchestras, he also plays second oboe with the Chamber Orchestra of the Triangle and Durham Symphony.  He has performed on oboe and English horn with the Greensboro, Western Piedmont, Wilmington, Sandhills, Davidson College, and Danville Symphony Orchestras and on Baroque oboe with the Raleigh Camerata, Greensboro Early Music, Mallarmé Chamber Players, and the Winston-Salem Collegium.  As a bassoonist he has performed as principal and second bassoon with the Durham, Western Piedmont, Elon University, and Lee County Orchestras and on Baroque bassoon with the Raleigh Camerata.  Dr. Turanchik has performed on oboe, bassoon, clarinet, saxophone, and recorder in pit orchestras throughout central North Carolina since 1997 and performs as a soloist and ensemble musician at churches and with choral ensembles across the state. 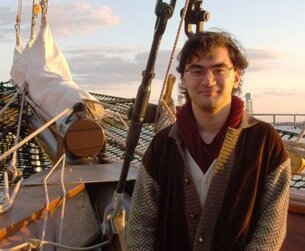 Simon Zaleski lives in Durham, NC, where he is the music director of Christus Victor Lutheran Church and teaches at the Village Music School in Cary.  He holds three master of music degrees, in harpsichord, composition, and musicology, from the Peabody Conservatory of Music in Baltimore, and has performed on a number of Baroque and Renaissance keyboard, string, and wind instruments with university-affiliated ensembles at Peabody, Duke, and UNC.  As a composer, he enjoys drawing upon a wide variety of musical influences-baroque, modern classical, Celtic, jazz, rock, soundtrack, synthwave, ambient-to create a colorful, "cinematic" style, and enjoys writing for soundtracks as well as the concert stage.  Some of his electronic music can be heard on multiple streaming platforms under the artist name "Beagle Music Labs."  To hear more, please visit simonzaleski.com!